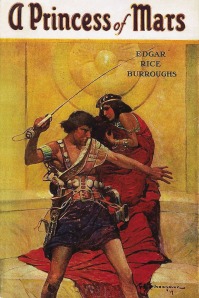 A Princess of Mars, the first in a series by Edgar Rice Burroughs about the exciting adventures Barsoom.

There are nearly a dozen books in this series, though I’ll frankly say I’ve never read past the first six.

The first three are about John Carter, a Virginian who, while prospecting, finds himself transported by mysterious means to Mars.  From there it is one exciting adventure after another as he learns to cope with the strange, brutal new world he’s found himself on and the strange, brutal people he’s found himself among.  There he meets the incomparably beautiful Dejah Thoris and the rest is history.

The next few books deal with his son, his daughter, and the daughter of Carter’s long-time friend among the Green Martians.  They’re good stories, but they don’t have the same feel as the earlier three and each one progressively seems to lack the lustre and wonder of the last.  Eventually you get to a book that feels like an attempt to rehash the first one with a new character.  I couldn’t finish it.

These stories are often credited with inventing the Speculative Fiction/Space Opera sub-genre of Planetary Romance.  The adventures of John Carter of Mars are deservedly engraved into the memory of SF, and their influence can be felt and seen in all but the newest stuff striving so hard to be unlike that which came before.  Ignoring the rest of the series I cannot recommend John Carter’s exciting adventures enough.  They’re truly timeless.  His chivalrous, honourable nature leaves him the kind of hero that will touch anyone in any era.  By all means, the later stories are a fun read, but more pulpy, and with less staying and wowing power.  But A Princess of Mars, Gods of Mars, andWarlord of Mars will blow your mind or your money back.

Don’t believe me?  Follow this carefully crafted link over to Project Gutenburg and try it.  I swear if you don’t like them you’ll be refunded every penny.  Though I’ve a feeling that you will love them and cherish them and find yourself time and again flying out and away to that arid red globe with its white apes, faithful Woola, the fierce six-armed giants such as Tars Tarkas, the grand towers of Helium, and more.  This is like Princess Bride in space – sword fights, and fist fights, true love, and brave deeds, impossible odds, and dangerous beasts.

Awesome for the start, mediocre for the rest.